Pharmaceutical terms are words and phrases that have a neutral coloration, which make it possible to unambiguously convey the meaning of a specific phenomenon, therefore, it is the translation of terminology that plays a key role in the interpretation of pharmaceutical documentation.

A distinctive feature of the translation of pharmaceutical documents is the presence in the texts of specific terms and phrases that are absent in the Russian language. The health and lives of thousands of people depend on the accuracy of the translation of instructions for medicines and medical equipment.

Grammatical and stylistic features of translation

Translation of anamnesis, research reports is characterized by the most complex grammatical structures that make it difficult for a linguist to understand and translate a text. For all the clarity of the terms with which the documents are overloaded, many of them are polysemic, which prevents the correct transmission of the original content.

When performing a translation, it is necessary to compose a speech chain, adhering to the structure regulated for specialized documents. Emotionally impersonal phrases should be interpreted without violating the true meaning of verbal units, the formalism of statements and the terminological specifics of linguistic constructions. “Neutrality” is the motto when translating pharmaceutical terms.

an abundance of narrow-profile terminology;
use of names in Latin;
lack of emotionality;
clichéd data;
variety of grammatical formulas.
When translating, it is necessary to adhere to the formal style characteristic of pharmaceutical documents, to master the stylistic and lexical subtleties of languages.

Features of the vocabulary of pharmaceutical documents

Vocabulary in pharmaceuticals is of increased interest due to visible extralinguistic and linguistic factors. Pharmaceuticals is the oldest terminological pharmacy, an established system, so it allows you to identify the laws of lexical nomination. The lexico-semantic system borders on two trends:

the use of narrow terms;
introduction of traditionally used words to designate terms.
English pharmaceutical texts are based on material with specific vocabulary and contain not only Latin borrowings. They are replete with international vocabulary, which the linguist must be able to adequately interpret. Terminological derivation of terms goes beyond the framework of a linguistic problem. This is due to their increased social significance, therefore, knowledge of the specifics of pharmaceuticals, a rich vocabulary, knowledge of grammatical material will enable the linguist to correctly translate the text.

Pharmaceutical vocabulary is international in nature, but many terms have different meanings in English and Russian, so there is a problem of “false friends of the translator”. Such phrases do not have an equal, short equivalent, their “openness” is attractive: they are similar in appearance and different functionally. These are pitfalls to avoid knowing these language pairs. Common translation errors include: 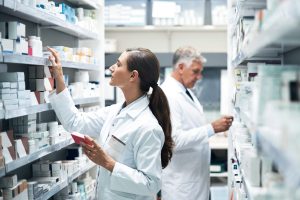 The meanings of these terms in Russian are clear, and foreign words consonant with them have an excellent translation. So, formula means “composition of the drug” or “nutritional mixture”, angina – translated as “angina”, elective – “planned operation”.

pragmatic – incorrect interpretation of the pragmatics of the translated text;
formal – deviations from the formal requirements for the structural, graphic design of the text, affecting its perception;
cultural – adaptation of the text that does not correspond to the traditional rules and norms of generation.
In order to avoid such mistakes, a professional linguist must know the described objects, processes and phenomena, vocabulary, grammar and stylistic means used by the authors. In addition to medical education, one must also have knowledge of chemistry and biology. A qualified, experienced translator, guided by a large-scale knowledge base and an extensive database of dictionaries, is the guarantor of the correct interpretation of any pharmaceutical document.